Bean About with Mulga the Artist

In 2016 Andy and I were thinking about a kids bag design that would be eye catching fun and cool. We both stopped, looked at each other and instantly thought of Mulga the artist after seeing his murals in and around Bondi.

We wanted this Bean About to not only be all of the above, this bag would have another job too. All of our kids bags are depicting 3 endangered species, the Mountain Gorilla, Rock Wallaby and the Tiger. Each kids bag sold will contribute a small amount to the charities that support each animal. Below is a short video of how Mulga brought Julio the Tree Hugging Gorilla to life…Enjoy!

An Ode to Julio the Tree Hugging Gorilla

He always take his bean bag when he’s swinging on vines
Because it doubles as a backpack, quite an ingenious design 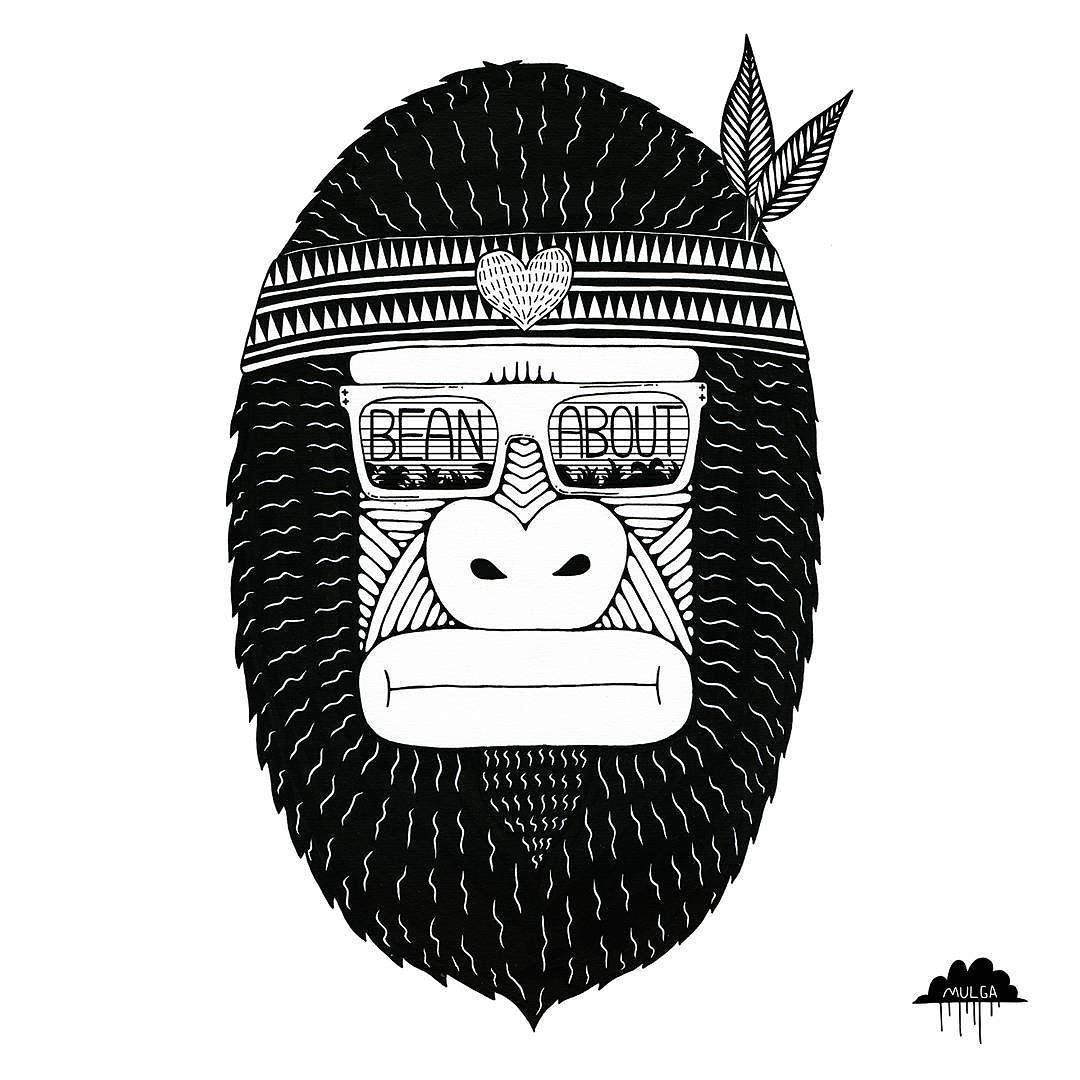 Mulga is Joel Moore, a Sydney based artist, freelance illustrator and poet who paints murals, designs t-shirts and runs the Mulga clothing label.

They do say life can imitate art, and with Joel’s bushy pirate beard, sunglasses, flat-cap, and easy-going personality, you can probably see a similarity in his artwork. Known for his unique style of intricate line work & bright colours, Mulga’s art ‘brings to life a world where tropical bearded men run rampant, lions smoke tobacco pipes, tigers wear diamond sunglasses and gorillas rule the world like some kind of funky planet of the apes.’…He’s a pretty cool dude.

“I hand draw my art using Posca paint markers and recently have been loving painting with flouro paint. Someone once described my art as ‘it pulsates with an untrammelled use of colour and is made up of textured shapes and intricate line work that transcendently floats with emotion.’ Someone really described it like that, no joke! Sounds pretty good to me.”

Joel only had his first art show launching his art career in early 2012, although it comes across as he’s been a pro at this a lot longer – Since then, he’s had 40 shows, won gold at the 2013 Illustrators Australia awards, and been the finalist and peoples choice winner at Hazelhurst’s 2013 Art on Paper prize. His creative portfolio to date is an impressive one to say the least, and Joel’s recent work has included; Microsoft, Virgin Mobile, MTV, Adidas, Mambo, Schweppes, Sol Beer, Channel 7 Sunrise, Australia’s Got Talent, Beach Burrito Co, and Tommy Franklin to name a few!

Joel has currently wrote and illustrated a kids book, and is also keeping busy painting murals on building, in buildings, running workshops, painting live at events whilst collaborating with awesome people and organisations.

Here’s a few interesting questions we asked Mulga whilst chilling in a couple of Bean About’s:

What is your favourite colour and why?

I love a bit of flouro pink because it is super bright and happy!

If you could give your younger self some advice, what would it be?

Put more time and effort into doing what you are passionate about like making art and music and waste less time watching tv and playing video games.

If you could paint on anything in the world, what would it be?

I would love to paint on a super jumbo jet, that would be fabulous! Then my art can fly around the world. Who has been your favourite character you have ever drawn, so far?

I have lots of favs and they change up with the seasons but a recent fav is Henderson the Hot Dog Rock Dog, he is part of a larger mural and is a pretty rad character. 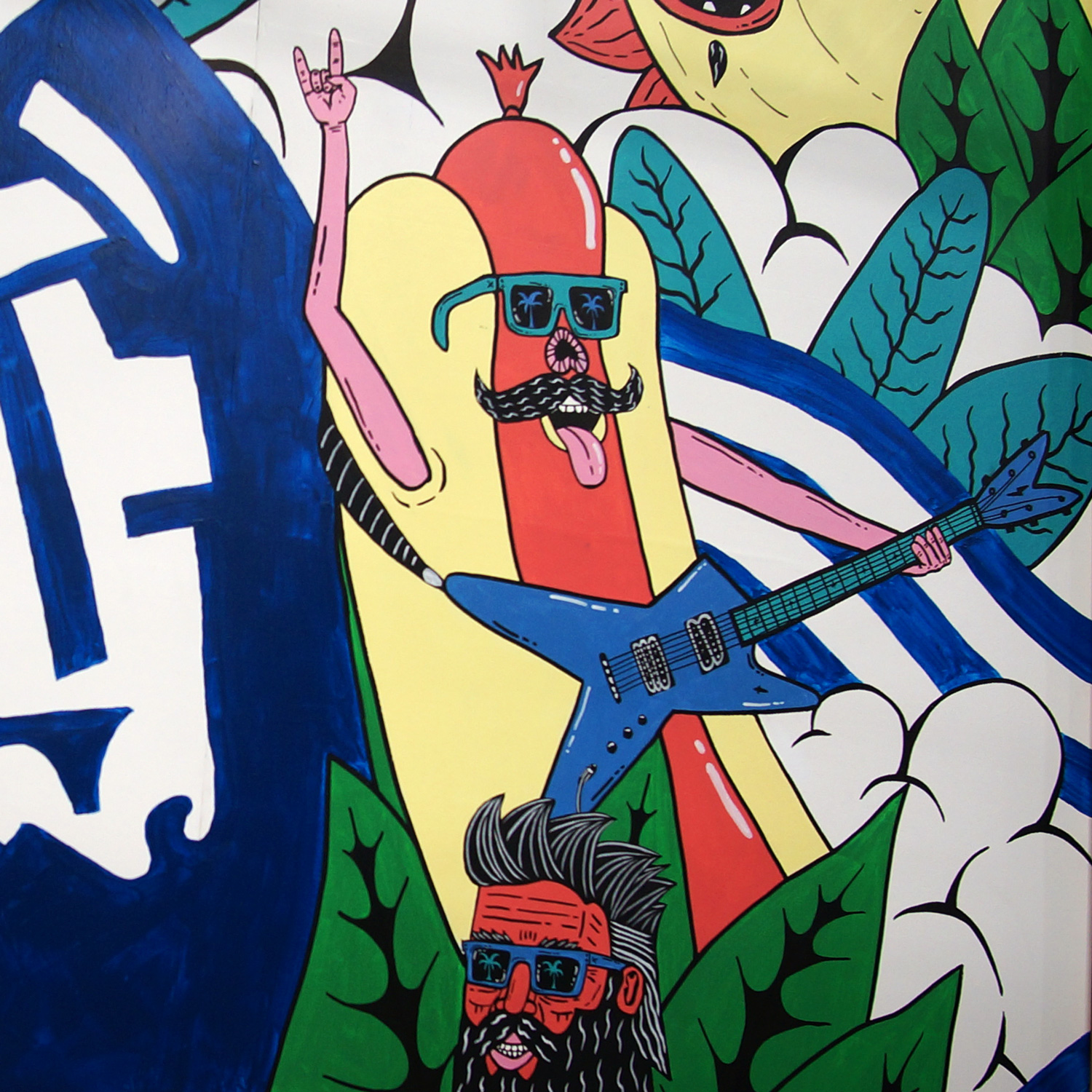 This is his story: Henderson the Hot Dog Rock Dog loves nothing more than to shred out blistering guitar solos in front of huge crowds of hot dogs, some of them not even wearing their buns. One time he did a guitar solo for over 45 minutes and when he opened his eyes everyone had gone home to bed. The End

If you could be commissioned by anyone in the world, who would it be and why?

I wouldn’t mind getting Kelly Slater to commission me and he can pay me by giving me rides in his wavepool. That thing looks very fun.

Imagine your having a casual BBQ and you could only invite 3 people dead or alive. What would your choices be a why?

Bill Murray because he is really fun, Jamie Oliver because he can make nice food and seems nice and Jim Carrey because he seems like an entertaining chap.

If you could create a Mulga band from any members of other bands, who would you choose?

Tom Waits would be the singer, Flea on bass, Animal from the Muppets on drums and Elvis on guitar with his guitar dance moves. 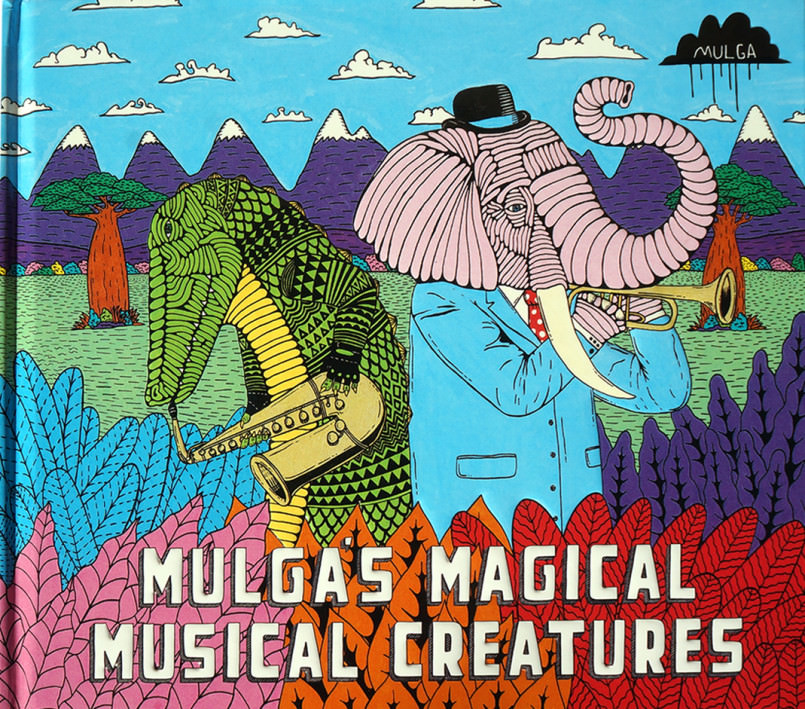 You’ve been asked to recreate a movie in your unique style, what would your chosen movie be?

Castaway with Tom Hanks because he grows a sweet beard and makes friends with a volleyball, I also enjoy the company of a volleyball. Plus I love palm trees and there was heaps of palm trees in that movie. 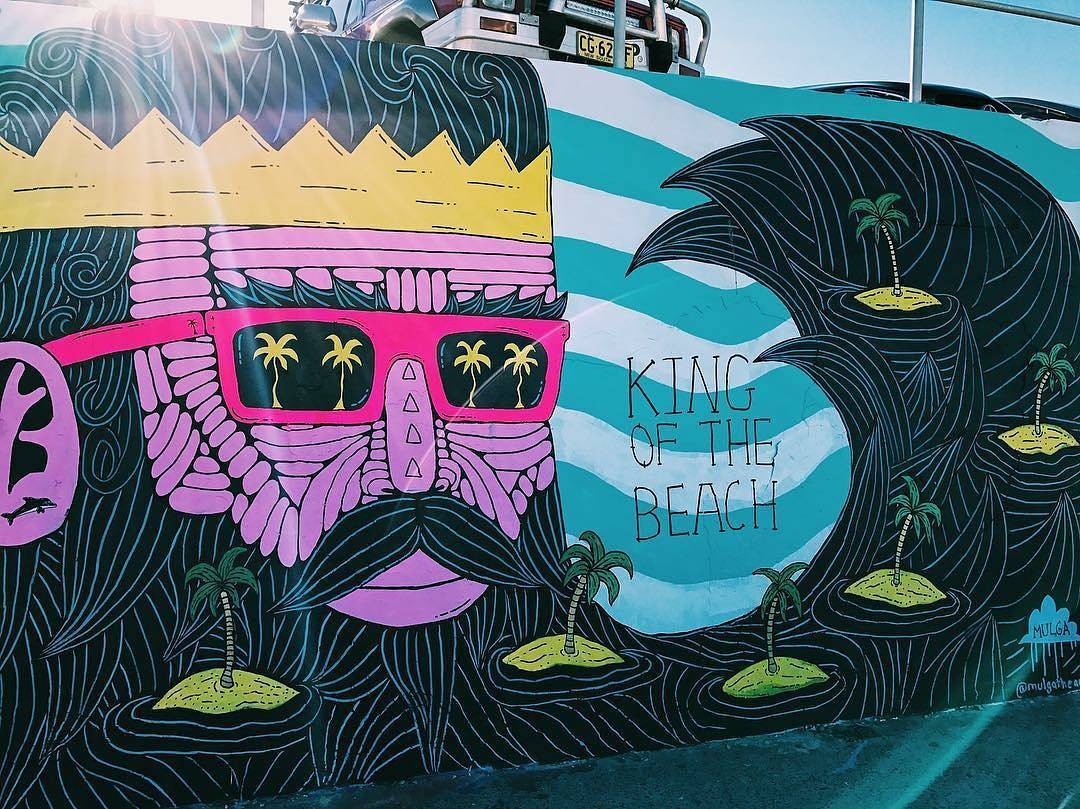 In Bondi, where do you like to go for:

Food? La Piadina – run by three Italian brothers they make the most amazing tasting Piadina’s.
Coffee? La Piadina
Drinks? Beach Road Hotel – I love the murals upstairs.
Artwork? La Piadina, every month a new artist paints on the outside of their café. It is really cool. I painted a bunch of flamingos.

You can catch some of Joel’s most recent artwork at 7-11 stores with his recent collaboration with Slurpee. Around Sydney he has murals in random places and a couple of cool ones down at Bondi Beach.